Arlington Commons, the largest redevelopment in Arlington history, has been named a finalist in the Dallas Business Journal’s Best Real Estate Deals of 2015. The project is being honored in the Suburban Multifamily category.

For the past 24 years, the Dallas Business Journal has sorted through hundreds of nominations to highlight the most outstanding real estate deals in North Texas, as well as the key players behind them. With Dallas’ major construction surge in 2015, this year’s awards are expected to be the biggest yet. 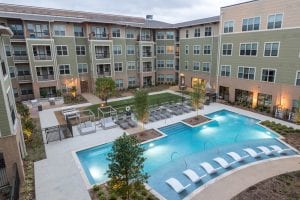 KWA Construction, alongside developer The Nehemiah Company, recently broke ground on the first phase of Arlington Commons, which will include a four-story, 353-unit building expected to be complete in 24 months. The final project, built over the next 10 years, will consist of four-phases and more than 1,300 units. Replacing apartment complexes from the 1970’s, the redevelopment has already gathered more than $10.5 million in economic incentives from the Arlington City Council.

“The Arlington Commons is going to have a huge impact in the community,” said Brian Webster, Vice President at KWA Construction. “Being recognized by a respected publication such as the Dallas Business Journal is a great indicator of that.”

Located at 425 E. Lamar, the Arlington Commons will provide quality living close in proximity to Globe Life Park and AT&T Stadium. Floor plans will consist of one- and two-bedroom units ranging from 777 – 1,281 square feet with private balconies or patios available. Amenities will include multiple substantial courtyards designed by landscape architect TBG Partners, as well as a swimming pool, fountains, fire pit and outdoor kitchen.

The winners for all participating categories in the DBJ awards will be announced on April 28.